Papa in the Sky: A Letter to My Father on Rosh Hashanah 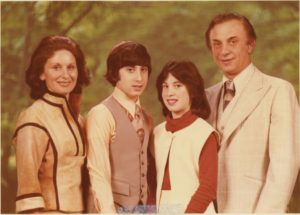 When you left us 25 years ago, passing away peacefully in your sleep, I wonder what was foremost in your mind. Was it your legacy? Were you worried about us carrying on?  Please be assured that your legacy is very much cherished and honored, and that we have carried on in ways you probably never imagined.

I was 29 then, single, and still finding my way.  I wasn’t ready to lose you.

I could never imagine how you weathered losing your entire family when you were still a boy.  And I could hardly fathom how you survived in the forests of Eastern Europe, never knowing whether a barn in the distance meant shelter or peril.  You later fought with partisan groups and eventually immigrated to America.

But it was not just your stories of survival in those horrible times that continue to resonate with me. It was the stories of your life before the War, and the principles that guided you afterwards, that still infuse my life with meaning.

You had every reason to lose faith in God and to discard the traditions that were shattered along with your home and family. Yet you sent my sister, Lisa, and I to a Jewish Day School.  You shared stories from your days in Cheder and hummed the niggunim you’d learned from your ancestors.  Your speech at my Bar Mitzvah in Israel on Chanukah in December 1976 speak volumes about the kind of man you were. You told me:

The war between the Greeks and Jews was an ideological one. For the Greeks, beauty was external, while for Jews, it was their internal being that was most important. Our goal in life is to reach the highest possible spirituallevel. As the Maccabees lit the fires of the Jews’ souls, so too have your parents, relatives, and honored guests here today lit the fire of your soul so that this day may be the beginning of your climb to a high level of spirituality, happiness, and prosperity.

You began a successful business and provided laughter and friendship for many. And your angels must have been with you when you met and married Mother. She had her own, very different story of survival after being orphaned as a toddler and raised by the Catholic couple who saved her.

When you courted her, your angst and deep love transcended your words.  You wrote:

Your pleasant disposition provoked me to write this letter. There was no one who had the power to raise me to heaven and throw me to the abyss. When I am in heaven, I am dreaming and longing for you. I want to share with you a bliss that has no boundary. When I am in the abyss, I want you with me to prove that all is not lost. The one who tasted fruits from heaven cannot live in the dark abyss. With that gift, you can only discover new heavens and I will build bridges to protect us from falling.

You had challenging and joyous times together.  When you passed, she was only 53, Like me, she searched for meaning and purpose in her life.

A year later, she confronted God at Jerusalem’s Western Wall angry with Him for making her “an orphan” again.  To her surprise, she sensed an immediate response, one that she initially interpreted as a Divine promise that she’d find a companion so that she would not be alone.

But her companion turned out to be volumes of journals, where she relayed  mystical dreams, visions, and what she believed to be Divine messages intended for her but also for others about transforming and healing our world.

Part of Mother’s journey involved travel, and Lisa was an enthusiastic chaperon in Machu Piccu, Rancho La Peurta and other places where she deepened her spiritual sensibilities.

I spent the better part of two decades working closely with Mother documenting her journey and crafting a book we are proud of. You should know that your presence and light are on every page.

You have three grandchildren now.  From their infancy, they have never known you as their “late grandfather.” To them you are “Papa in the sky”—very much an active part of their lives. Your strength and spirit inspire them always.

You passed just before Rosh Hashanah, a holiday of introspection and hope.  As you know, tradition also holds that it is the anniversary of creation, which actually began five days earlier —on the 25thof Elul.

Twenty-five years is at once a long period of time and a blip in the timeline of God’s creation. Dear Papa, know that we have grown since you left us; know that you still inspire us; and know that we have faith, as you did, that, as the Torah says, “And God saw the light, that it was good.”

Your loving and eternally grateful son,

Mitchell Weitzman is the co-author of The Rose Temple: A Child Holocaust Survivor’s Vision of Faith, Hope, and Our Collective Future.