How Mother’s Day Can Change The World 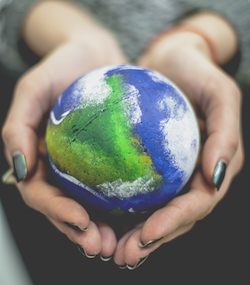 This Mother’s Day, I am of course grateful for the life and nurturing my mother gave me.  And I am blessed that she is still with me.  Yet even in the annals of mother-son bonds, I dare say that our bond has been unusually strong given our eighteen-year collaboration on a book about her extraordinary life and vision for the future.  In the course of our writing, she once told me, not necessarily referring to herself, that “a mother’s love is the most powerful force in the universe.”  Most of us can agree that a mother’s love is a wonderful, even essential, part of life.   But the most powerful force in the universe?  How’s that?  Allow me to explain.

Unimaginable Choices of Courage and Sacrifice

My mother, a Jewish toddler during the Holocaust, was given away to a Polish Catholic woman and her husband in a desperate attempt to save her.  Both women faced unimaginable choices: Her birth mother’s parting with her only child and the risk her adoptive Catholic mother accepted by taking a Jewish child into her home at a time when that was punishable by death. Tragically, her birth parents did not survive and she was lovingly raised Catholic by her adoptive parents though as a Jew she was frequently taunted by some in her postwar hometown.

My mother is a forward-looking woman. Publishing a book was the last thing she imagined doing.  Childhood vulnerabilities and fears still lingered and privacy was her natural impulse. But having embarked on a spiritual journey that sought meaning and purpose from her experience, she considered how there was light even then the world seemed to go dark.  Her adoptive mother not only saved her, she nurtured her, and, later, selflessly suggested that she reconnect with the Jewish community when her future in Poland looked bleak.

Sadly, the forces of intolerance still sully our world today. Is there hope it will ever change?

“Men have long written the script of world religion and history,” my mother says.  “It is time for the feminine voice to be heard, and a mother’s love may hold the key to healing and transforming our troubled world.”

The power of a mother’s love comes as no surprise to anyone who has witnessed a child cradled in her mother’s arms. A mother’s love is nurturing; it is compassionate; it is comforting.  It can even be, as was the case for my mother’s birth and adoptive mothers, sacrificing and life-saving.  Just imagine energy like a mother’s love coursing through all corners of the earth.

This Mother’s Day, consider how a mother’s love can not only affect her own children, it can change the world.

Mitchell Weitzman is the author, with his mother, of The Rose Temple: A Child Holocaust Survivor’s Vision of Faith, Hope, and Our Collective Future. Lucia Weitzman reflects on her birth and adoptive mothers here.