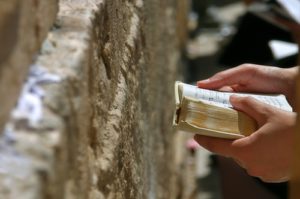 Choices Have Both Personal and Universal Consequences

The Biblical story of Adam and Eve demonstrates how choices have both personal and universal consequences.   On Yom HaShoah, as we recall the enormity of the Holocaust, we should consider all the personal choices, from the seemingly trivial (such as a childhood taunt) to the significant (such the proclamation of crusades or pogroms) that, over the centuries, provided the hateful platform for what would become an unprecedented era of destruction.

Lucia Weitzman, a Jewish toddler during the Holocaust, reflects on the unimaginable choice her birth parents made to be separated from their little girl in order to save her. At the same time, she recalls the incredibly courageous choice of the Catholic couple, Franciszek and Genowefa Swiatek, who took her into their home despite the risk to their own lives for sheltering a Jew. They are honored in Yad Vashem’s Garden of the Righteous.

If the evil perpetrated during the Holocaust was unconceivable, the Swiatek’s acts of kindness and love was unimaginable. Raising Lucia as a Catholic (Lucia was the only known Jew left in her hometown), Genowefa nurtured her and was the initiating force in Lucia’s eventual reconnection with the Jewish community.

Genowefa’s choices, both during and after the war, obviously had a personal effect—a life was saved and a heritage was preserved.  Could her choices also have a universal outcome? On some level, every choice does; whether for good or bad.

In her video “The Power of Choice,” Lucia Weitzman talks about yet another choice she faced long after the Holocaust.  After leaving Poland in 1961, she married a Jewish man and raised a traditional family, locking away much of her past inside a “vault.”  Years later, deep in mourning following the loss of her husband at age 53, long-suppressed emotions rose to the surface and Lucia confronted God at Jerusalem’s Western Wall.

So began a spiritual journey that on one level was personal, speaking to her search for her authentic self and life purpose when others had long labeled or defined her; and on another level contained a more universal message:  the need for a shifting global consciousness from a paradigm of divisiveness and intolerance to one of healing and connectedness.

Her journey has been intense, consuming, and largely solitary. Presented with many opportunities to remarry or resume her previous social activities, she instead chose to maintain her spiritual work, which in many ways was as challenging as her childhood had been.

“Some choices are made for you,” Lucia says, “but the choices you make can change you and change the world.”

In an age of escalating hatred and violence, Lucia testifies to the power of choice that lies within each of us, to transform and attempt to heal both ourselves and the troubled world we live in.

Find out more at TheRoseTemple.com