Reaching Beyond The Synagogue On Holocaust Remembrance Day 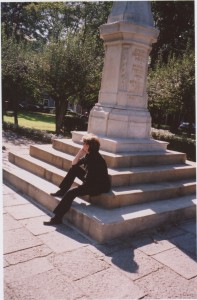 Jews and others will gather in synagogues, community centers, schools, and other venues to remember those lost in the Holocaust, and to decry the intolerance and hate that enabled the tragedy. “Never again” will be a common refrain.

Yet it is a relatively safe bet that the people who should be hearing the words spoken at Yom HaShoah gatherings, such as perpetrators of violence in Europe and the Middle East, will not be in attendance.

Some endorse the Holocaust without pretense. Others deny its existence or minimize its scope. A far greater number know little or nothing about its lasting significance.

Even the briefest of glimpses at world events since the Holocaust reveals that it is not just Jewish people who are affected by the spread of hate and intolerance. Many peoples—Muslims in Bosnia; Christians in the Middle East— have been persecuted. And a resurgence of anti-Semitism often cloaked as anti-Zionism renders the concept of “Never again” increasingly fragile.

Is There Hope for the Future?

In light of all the destruction since the Holocaust and the turbulent state of affairs today, one might ask: Is there hope for the future?

In time, tyrannical regimes and the evil they perpetrate will crumble, as they have throughout history. But what can be done to effect change and promote tolerance and peace now?

Military and security interventions can minimize damage, but they don’t change attitudes, and they don’t replace seeds of hate with seeds of love.

Fortunately, there are countless organizations, institutions, and individuals who work tirelessly to break down barriers and foster peace. Some do so within organized interfaith efforts on campus and in our communities while others engage in person-to-person acts of empathy and kindness.

Together with my mother, a child Holocaust survivor, we are striving to add our energy to these efforts. With the release later this month of The Rose Temple: A Child Holocaust Survivor’s Vision of Faith, Hope, and Our Collective Future, we hope to flood the world with love, creating a deluge of such magnitude that there simply is no oxygen left for evil to breathe.

A related website invites people of all religious and ethnic backgrounds to share their stories of hope, faith, inspiration, heroism, empathy, or kindness and speaks to harmony, healing, peace, and breaking down barriers between people.

As these stories are collected, they become an antidote to the destructive events currently dominating the news. Wishful thinking? Perhaps, but surely most of us hope for a collective future that is better than what we have today—or what we had in Europe over seventy years ago.