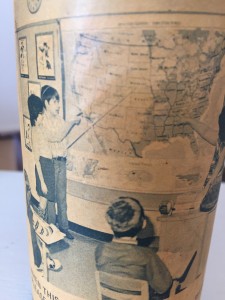 In an opinion piece this last Friday, political columnist Charles Krauthammer  extracted a Bernie Sanders answer to a question in Michigan’s Democratic debate which serves not as a springboard discussing politics, but as a foundation for assessing the state of Jewish identity in contemporary America.

Debate moderator Anderson Cooper had asked Sanders to comment on a Detroit News article which said that Saunders had intentionally kept his Judaism in the background.

“No,” said Sanders.  “I am very proud to be Jewish, and being Jewish is so much of what I am.”  As Krauthammer notes, the fact that Sander’s Jewishness has largely been in the background is a testament to the “health of our republic — the most tolerant and open nation on earth.”

But it is in Sander’s follow-up that Krauthammer sees an opportunity not to criticize him, but to comment on contemporary American Jewish identity.  Sanders explained that the Holocaust had wiped out his father’s family and he remembered seeing, as a child, neighbors with concentration camp numbers tattooed on their arms.

Krauthammer finds this “a fascinating answer, irrelevant to presidential politics but quite revealing about the state of Jewish identity in contemporary America.”

Why? Sanders might have spoken about his Jewishness in terms of his practices, or he could have referenced the Jewish notion of “Tikkun olam” (healing or repairing the world).  Instead, by citing the Holocaust, he reinforces what Krauthammer views as the phenomenon of the Holocaust becoming the primary identifier for American Jews at the expense of the richness Judaism offers to both contemporary and future generations.

Krauthammer points to the growing Holocaust emphasis in Jewish education, from Sunday schools to university Holocaust studies programs, as one example of what he sees as an unfortunate trend tipping the scales from a necessary dedication to keeping alive the memory and the truth of the Holocaust to Holocaust memory emerging as the dominant feature of Jewishness in America.

In August of last year, actress Natalie Portman, whose grandparents perished in the Holocaust, expressed similar sentiments. In an interview for the Independent, Portman said,  “I think a really big question the Jewish community needs to ask itself is how much at the forefront we put Holocaust education. Which is, of course, an important question to remember and to respect, but not over other things.”

To be clear, from what I gather, neither Krauthammer nor Portman are trivializing or minimizing the importance of Holocaust education. Their concern is that this not be the sole educational experience for Jews, and that Judaism and Jewish history not be reduced to victimhood.

I wholeheartedly concur with both Krauthammer and Portman, with a few caveats. We must remember that the memory of the Holocaust is still raw – yes, even over seventy years later. Is there a time limit for grief? Is there a point at which we are supposed to “move on”? If we can’t answer those questions individually, then what makes anyone imagine that we can answer them collectively?

My mother, a child of the Holocaust, has had a fulfilling, eventful life, including a remarkable spiritual journey which we wrote about in our forthcoming book The Rose Temple.  Yet, she says: “What happens to you as a child stays with you forever. It never leaves you.”

So let’s take a moment and be kind to ourselves if we tend to over-emphasize the Holocaust. Let’s forgive ourselves.  But let us also acknowledge that Holocaust remembrance need not overwhelm Jewish identity. Holocaust education and instruction in Jewish practice, history, and philosophy are not mutually exclusive.

Judaism has much to offer the world, and its essence should and must be preserved and fostered.  As for the Holocaust, its critical lessons, such as tolerance and empathy, are still very much needed today.